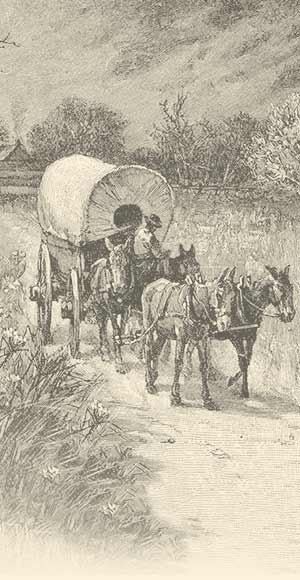 Highway 220 follows in the steps of the settlers who traveled along the Carolina Road. This section of the Great Road reached from Virginia into North Carolina, beginning in the late 1740s. Scots-Irish and Swiss-German settlers from Pennsylvania and Virginia crossed the Blue Ridge through Maggodee Gap. The route was improved as a stage road in the early years of the republic. In 1838 it was rebuilt to serve as the Pittsylvania, Franklin & Botetourt Turnpike, which served to connect south central Virginia with the Valley.

Today, the region along the Carolina Road is a landscape of great physical beauty and historical significance connected to nationally significant leaders like Patrick Henry and Booker T. Washington. Outdoor living history programs, local history collections, and a major natural history museum are only a part of the wealth of recreational and cultural opportunities available along the Carolina Road.

The Great Wagon Road extended though the area to the west of the modern Route 11 corridor. It crossed the Maury River at a location known as Campbell’s Ford (now Staunton) and the James River at Looney’s Ferry (now Buchanan). The historic road divides into the sections known as the Carolina Road and the Frontier Trail at the gap in the Blue Ridge Mountains near present-day Roanoke. The Roanoke County seat at Salem was formerly the location of an important Totero Indian village. The City of Roanoke was developed after the Civil War as a rail transportation center.

Today, the Crossroads area is a thriving commercial hub near the intersections of important transportation corridors, where rail, air, and highway travel come together. Roanoke is the largest city on the Wilderness Road Trail. The area was settled at an early date by important historic figures and teems with museums, historic hotels, and shopping opportunities. Proximity to the mountains means easy access to the Blue Ridge Parkway and the Appalachian Trail.

The Valley of Virginia has been occupied for 10,000 years. A network of paths followed natural routes along high ground and over shallow fords at water-courses. Many of the European immigrants who disembarked at Philadelphia headed into the southern “backcountry” along the Great Road. It was usable by wagons, was gradually extended south to the James River by 1745 and reached into Carolina by 1748. Winchester was founded in 1744. Harrisonburg was founded in 1779 in an area settled by families of Swiss-German extraction. Staunton was founded in 1778 in an area mostly settled by Scots-Irish immigrants at the south end of the Valley. Although the Valley soon became “thickly inhabited,” the Great Road remained rutted, rocky, and overgrown for many years. Not until the 1830s was there support for the creation of a thoroughfare—“The Valley Pike”— that would better link the Valley towns.

Today, the Shenandoah Valley is lined on the east by the spectacular Skyline Drive and encompasses historic and recreational sites associated with every important period of the nation’s history. The Valley Pike, now US Route 11, follows the well-marked route of the Great Wagon Road. Well-preserved towns line the old Valley Pike, featuring museums, grist mills, public parks, and fine restaurants along the way. Natural Bridge and Grand Caverns are among many natural wonders that have astonished tourists since Thomas Jefferson’s day.