In the mid-eighteenth century, access to Southwest Virginia was difficult due to the climb up the Alleghany Ridge south of Salem. The area beyond the Alleghany was first settled at Draper’s Meadows near Blacksburg in 1745. A new road was blazed from Staunton south to the New River near Blacksburg with the mark of “two notches and a cross.” By 1800, an alternate road to the east of it, running from Salem through Christiansburg, won out as the preferred route to the southwest. It crossed the New River at Ingles Ferry (now Radford), and corresponds closely to Rt. 11 and I-81. Known as the Ingles Ferry Road, it became the great corridor of migration to the west after the American Revolution, when thousands of immigrants poured through the New River and Holston valleys on their way to newly opened territories in Kentucky and Tennessee. 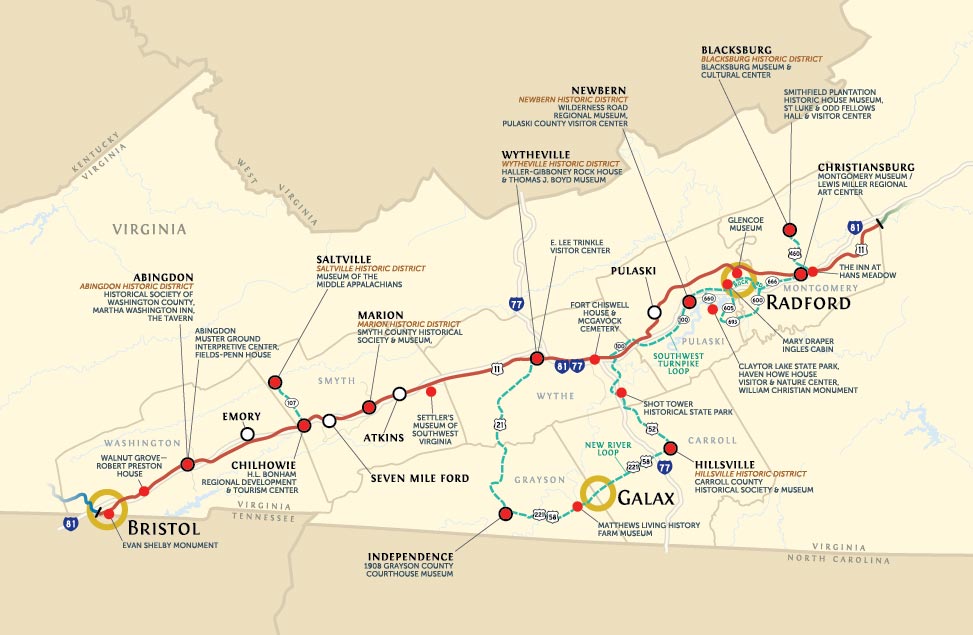 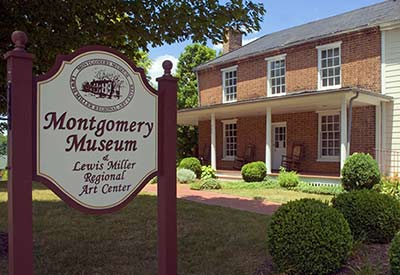 The town of Christiansburg was laid out around a central public square as the Montgomery County seat in 1790. Christiansburg’s Montgomery Museum houses a wealth of artifacts related to regional history and local artists, as well as family history research opportunities. The museum building was built around 1852 to serve as the Manse or minister’s residence for the Christiansburg Presbyterian Church. Ever-changing exhibits, presenting local artists, are displayed in the second-floor gallery. The museum shop features local history books, reproductions, and gifts. 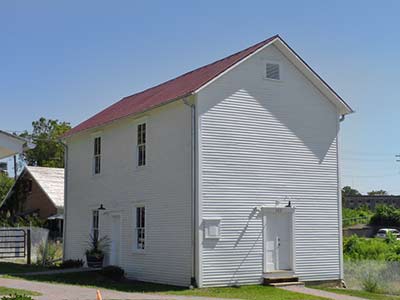 Slavery was on a smaller scale in western Virginia, and Montgomery County citizens were not overwhelmingly in favor of its continuation. Thousands of African-Americans, often shackled and chained together, traversed the Great Road through the vicinity in slave “coffles”on their way from auctions in the upper South, where tobacco culture was on the decline, to the Deep South. After the end of the Civil War, freed black communities and organizations were formed across the state. The Order of Odd Fellows and the Order of St. Luke joined forces in 1907 to build a community social center. It has been restored by the town of Blacksburg as a museum of African American culture and visitor center. 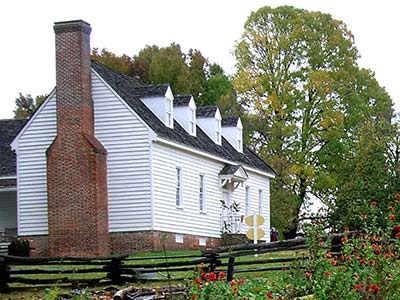 Built about 1775 as the home of political and military leader William Preston, Smithfield is one of the oldest houses in Southwest Virginia. As surveyor of Montgomery County, Preston was in charge of the division of new lands to the west, including Kentucky. The house is furnished to represent the occupancy of the Preston family. The basement museum contains displays of historic objects and Native American artifacts from Montgomery County’s Shannon site, the most famous Woodland Period site in the Blacksburg area. A gift shop makes available reproduction artifacts, books, and colonial-era toys.

Glencoe, built in 1875, is the historic dwelling of Civil War General Gabriel Wharton and home of the Glencoe Museum and Gallery. The museum interprets the history of Southwest Virginia, highlighting the contributions of the Native Americans, early settlers, industries, educational institutions, businesses, local artisans and handicrafts, as well as topics of local interest. One of the most important collections on display is a group of Native American artifacts uncovered at Radford’s important prehistoric village, known as the Trigg site. 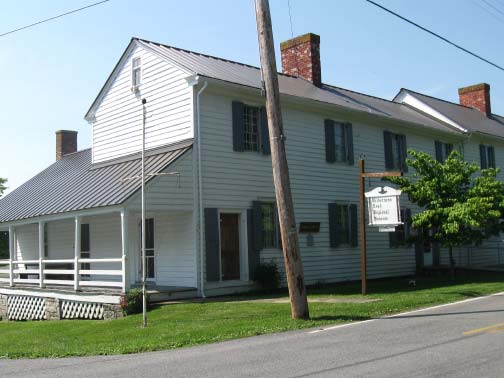 Newbern, established in 1810, contains a fine collection of frame and log buildings. Landowner Adam Hance recognized the economic benefits of developing a town along the Great Road, midway between Christiansburg and Evansham (now Wytheville). The building housing the museum is made up of two structures, an 1810 tavern and store and the 1816 Hance family home. The museum, owned and operated by the New River Historical Society, exhibits artifacts and documents highlighting life along the Wilderness Road. 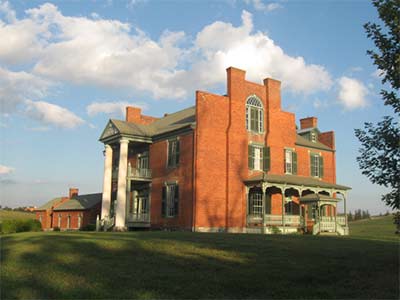 One of the most recognizable landmarks in Southwest Virginia, the house popularly known as Fort Chiswell Mansion was finished in 1840 for two brothers—Stephen McGavock (1807–1880) and Joseph Cloyd McGavock (1813–1886). The house has a fine Flemish bond facade, a two-story portico, unusual stepped gable parapets, and a fine staircase on the interior. Today, the Mansion at Fort Chiswell shares its rich history, promoting local and regional tourism, supporting educational programs, and contributing to the growth and success of local and regional artists. The walled McGavock Cemetery contains a rich collection of Germanic carved stones. 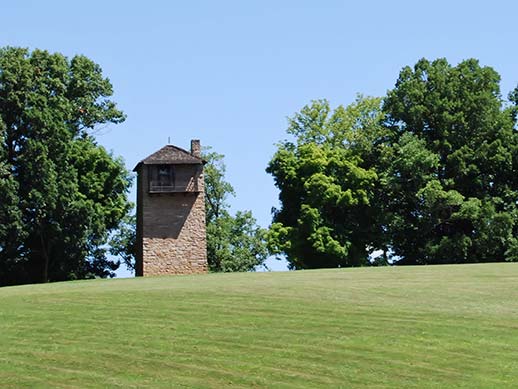 An important lead mine was developed near here as early as 1757 and served as a principal source of lead during the American Revolution. Stephen F. Austin, who moved west and became known as “the Father of Texas,” was born at the mines in 1793. The tall limestone Shot Tower, dating from before 1800, was built into the bluff along the New River above a seventy-five-foot deep shaft. Lead was hoisted to the top of the tower, melted, and then poured through a sieve. The lead droplets hardened into round shot during the 150-foot descent into a kettle of water near the river’s edge. 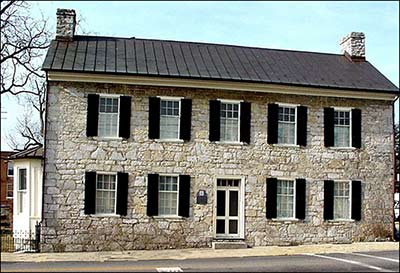 The town of Evansham, later named Wytheville, was established in 1790 as the seat of Wythe County, located on the Great Road. The Haller-Gibboney Rock House has played a significant role in Wytheville’s history since its construction in 1823. Original owner Dr. John Haller served his community as a country doctor, county coroner, and delegate to the Virginia Legislature. The house, together with the nearby Thomas J. Boyd Museum, exhibits original artifacts and period furnishings to interpret the settlement and development of the historic town. The exhibit includes objects uncovered in excavations at the nearby site of Fort Chiswell.

The E. Lee Trinkle Visitor Center is a great place to obtain information about cultural and recreational opportunities in the area. The Willowbrook Jackson/Umberger Homestead Museum next door helps visitors understand rural life in the region. A historic gas station, built by Herbert R. Umberger in 1926, embodies a later period of cross-country migration. Originally called the “Lakes to Florida Service Station,” the building contains a small museum that interprets early twentieth-century transportation along Rt. 23, then known as the Great Lakes to Florida Highway. 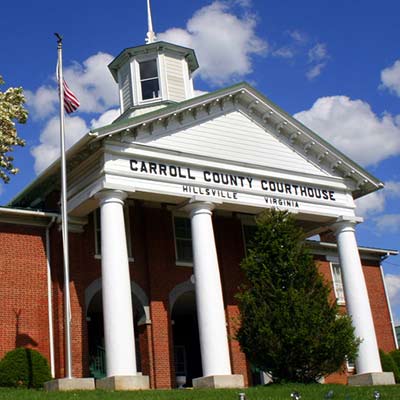 Hillsville was laid out in 1842 to serve as the seat of newly-founded Carroll County. The historic Carroll County Courthouse, home of the Carroll County Historical Society and Museum, presents the rich history of the county and its communities. Early Native American artifacts recovered from a nearby archaeological site are on display. The historic courthouse was the site of a famous courtroom shooting in March 1912. 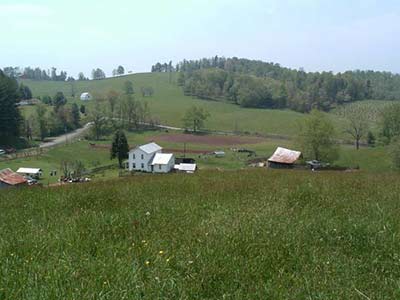 Grayson County was settled in the mid-eighteenth century. The upper portions of the New River Valley were not easy to reach due to the difficult geography. The Grayson-Raleigh Turnpike, constructed in the 1850s, connected Grayson County with more distant markets. The Matthews Living History Museum was founded to preserve the cultural heritage of upper New River Valley farm life by presenting its artifacts, tools, equipment, methods and skills.

The new town of Independence replaced the Grayson County seat at Greenville in 1850. Independence was laid out at the intersection of the main roads crossing the county from the north and east. The courthouse was built on a public square at one corner of the crossroads, across from a hotel and a store. The courthouse of 1908 has been restored and contains a museum of regional life and customs, a gift shop with regional crafts, and an auditorium used for concerts and plays.

The Settler’s Museum, by means of a collection of historic buildings, presents the story of the different ethnic groups that migrated through and settled along the Great Road. The Visitor Center houses an exhibit entitled “The Migration Story” which explains the story of the Ulster-Scot and German migration up the Valley of Virginia. 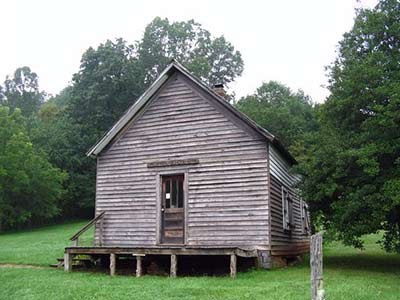 The Smyth County area was settled in the mid-eighteenth century and formed as a county in 1832. Thomas Hume’s land on the Middle Fork was selected as the site of a county seat, named in honor of Gen. Francis Marion of Revolutionary War fame. The museum offers a “tour through time” that interprets the economic and social development of rural Southwest Virginia with an impressive collection of artifacts from the prehistoric to the modern era.

Museum of the Middle Appalachians 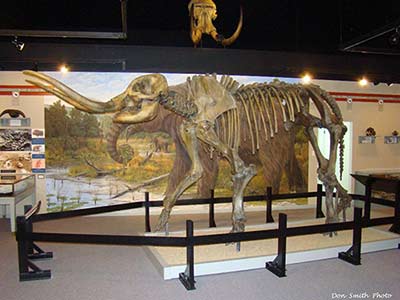 Gen. William Russell moved to the Salt Lick in 1788 and dug one of the first salt wells, marking the beginning of an important commercial mineral industry and company town. By the time of the Civil War, the salt works consisted of 38 furnaces boiling 2600 one-hundred-gallon kettles twenty-four hours a day. The Museum of the Middle Appalachians explores the long history of the region, in particular the attraction of prehistoric animals such as the woolly mammoth, as well as humans, to the rich deposits of minerals in Saltville.

Washington County was formed in 1776. The town of Abingdon has served as Washington County’s transportation, commercial, and political hub since it was laid out in 1778. Its location on the Great Road and later the Southwestern Turnpike brought prosperity. The Historical Society of Washington County is housed in the restored Abingdon Train Depot. The Society is available for genealogical and historical research, including local and regional history, published genealogies, and family histories. 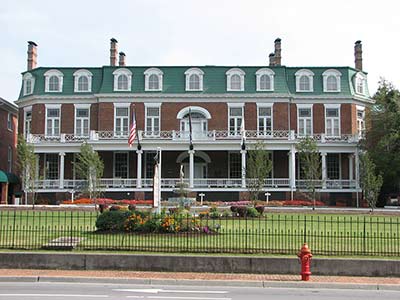 The Martha Washington Inn is a historic hotel located in Abingdon, Virginia. The unusually elegant and substantial house was built in 1832 by General Francis Preston, hero of the War of 1812, for his family of nine children. The building has served since then as a women’s college, a Civil War hospital and barracks, and as a residence for visiting actors of the Barter Theatre. The hotel has been restored in recent years and, with the nearby Barter Theater, forms the centerpiece of downtown Abingdon. 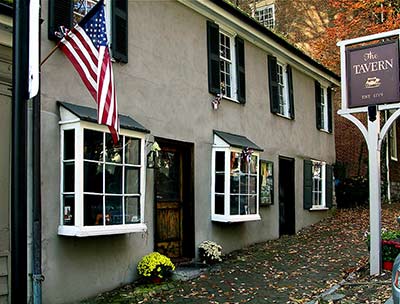 The Tavern, the oldest of Abingdon’s historic buildings and thought to be one of the oldest structures in Washington County, was built in 1779. Originally known as Yancy’s Tavern, it has had such guests as Henry Clay; Louis Philippe, King of France; President Andrew Jackson; and Pierre Charles L’Enfant, designer of Washington D.C. Today it is a fine restaurant.

The northern trailhead for the Overmountain Victory National Historic Trail, the Abingdon Muster Ground is the regional center for American revolutionary period history. This is the place where local soldiers gathered to march to battle. Exhibits help visitors discover what life was like for the Overmountain men, backcountry women, African-Americans and Native Americans, as well as British Loyalists. The gift shop provides gifts, books, and historical reproductions.

General Evan Shelby (c. 1720–1794), was born in Wales and took part in the French and Indian War. He commanded a company of militia from Sullivan County at the battle of Point Pleasant, and was the leader of the famous Chickamauga expedition. Shelby moved to the Bristol area in about 1773. He served as brigadier general of the militia of the frontier district of North Carolina. His very unusual coffin-shaped cast-iron monument is located in Bristol’s East Hill Cemetery.